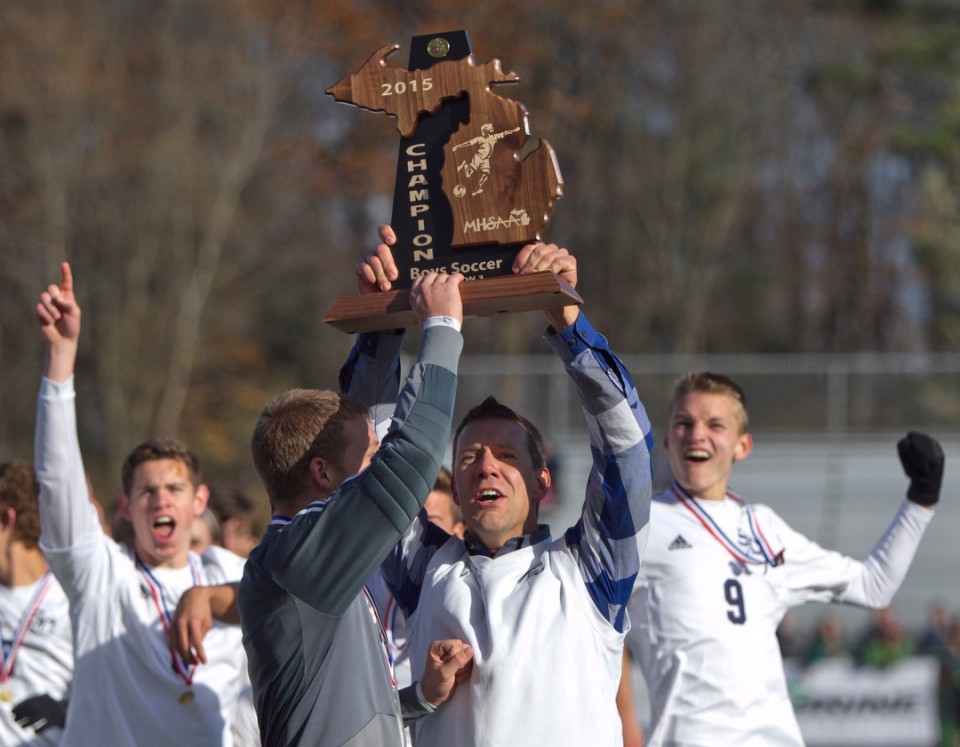 Selvius wasn’t giving it up.

“It’s coming to bed with me tonight, that’s for sure,” said Selvius, after leading the Sailors to their third state championship in the past six years.

South Christian edged Williamston 1-0 in the Division 3 state finals in a game that was decided in a shootout. The Sailors, who outshot the Hornets 5-3 in penalty kicks, had the Hornets right where they wanted them after battling to a scoreless tie through two 40-minute halves and a pair of 10-minute overtimes.

Williamston outshot South Christian 24-5, but Selvius kept the Sailors in the game with 14 saves. He had an additional save in the shootout, which saw all five Sailors score, including Selvius.

“I couldn’t be prouder of my guys,” Boersma said. “We gave up one goal through the whole playoffs. I guess if we had a PK shootout against anyone, we would win every time, honestly. Carter is going to make a save or two. He is so good, he’s so dynamic, he gets to places nobody else does.

“Did you see the save he made (in the shootout)? It was out of this world. It was a lower corner on a rifle, and his hand got there and knocked it wide. That’s unbelievable. No one else can get there. And then he buried his shot. That’s ice water in your veins.”

Saturday’s game was a rematch of the 2012 state finals that saw South Christian defeat Williamston 1-0 in overtime. It marked the fifth time in the past nine years that the Sailors have played for the state title. South Christian won a championship in 2010 in addition to 2012 and was runner-up in 2007 and 2013.

Austin Clark, Oliver Weesner, Ryan Doornbos and Zach DeKock all converted penalty kicks for the Sailors, with DeKock nailing the game winner past Williamston keeper Ian Petri. The Sailors lost the 2013 state title in a shootout.

“It’s a horrible feeling, to lose this way on a PK shootout,” Boersma said. “Williamston played a heck of a game and did everything they had to do. Williamston had four point blankers. Two of them were shanks, and two of them Carter made big saves on. That’s how you win games. Defense.

“I told their coach before the game that if we end up in a PK shootout, let’s shake hands (before the shootout) because whoever loses isn’t going to feel good,” Boersma said. “We were on the losing side of it in 2013. You play your hearts out, and to end on that is not the most fun way to end things.”

Both teams gave up one goal each through its first six playoff games combined. The Hornets outshot the Sailors 8-2 in the opening half, but Selvius recorded five of his saves to keep the game scoreless at halftime.

“Our defense has been great all season long,” Selvius said. “They don’t give up any easy shots. (Williamston) was able to get a couple of opportunities, but I was fortunate to get a hand on them.”

South Christian wrapped up the year 20-3-3 overall, while Williamston ended its season 19-6. It was the third state finals appearance for Williamston in four years, having finished runner-up in 2012 and 2014.

“Any time you come out on the short end of a game where you outshoot and out-possess your opponent, you’re going to be disappointed,” Williamston coach Brent Sorg said. “But we had an incredible year, and I can’t tell you how proud I am of these guys. We had quality senior leadership. We had 13 guys who helped lead us, and I’m proud of how we’ve come in the last several years.

“Their goalkeeper did a heck of a job. He made some tough saves and kept them in the game. I thought we had a couple of good looks, and we just didn’t put those chances away. There were some we hit right into his frame. I don’t know if those were quality opportunities, but those are opportunities. If you put those away, suddenly it’s a 3-0 game and we aren’t in this position.”