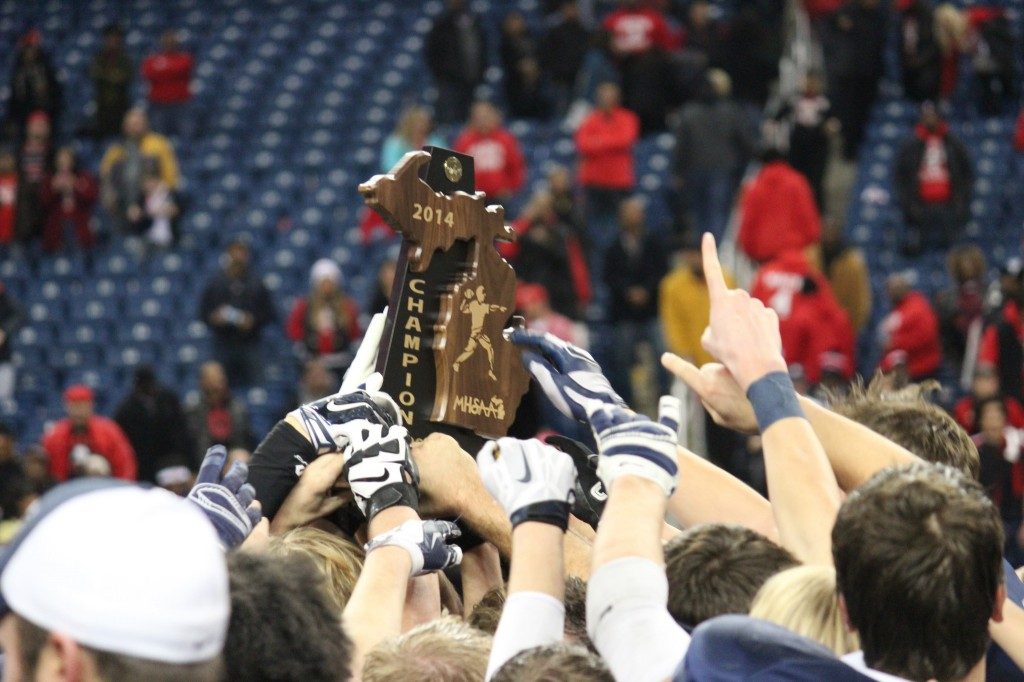 Among them is one of the best football players in the state, a multi-talented young man who finally got his own state title.

The Sailors defeated Lansing Sexton 28-27 in a game that saw those seniors shut down a hard-charging offense late.

Leading that effort was senior Jon Wassink – an all-state quarterback, defensive back, punter and kicker.

“I love every part of the game, but I just love playing quarterback,” Wassink said. “I love scoring and I love all the parts of it. It’s what I’ve been playing the longest.”

That showed as Wassink completed 14-for-21 passes for 179 yards and three touchdowns in addition to running 18 times for 122 yards and one touchdown. He punted six times for 239 yards, kicked two extra points and ran in for a 2-point conversion.

Senior wide receiver Eric VanVoorst, who broke his ankle in the second game of the season, returned to the team last Saturday to score two touchdowns and help his teammates make the final run to Ford Field.

VanVoorst scored one touchdown Friday, but as it turned out, he needed to step up another part of his game as well.

“We had a guy go down early (defensive back John Masselink rolled his ankle) so I had to play a lot more defense than I planned to,” VanVoorst said.

VanVoorst made consecutive key defensive plays – neither of which he remembers much about – during the Big Reds’ final drive to stymie their progress.

On the first, quarterback Malik Mack evaded two South Christian defenders and attempted to dart up the middle of his offensive line. VanVoorst tripped him up. One play later VanVoorst timed a shot on Sexton receiver Rayshawn Wilborn, knocking the ball from his arms as he fell.

“I don’t know, I don’t remember those,” VanVoorst said with a laugh. “It felt great to play defense again. I didn’t play a lot of defense last week but I knew I’d come out and play a lot more this week. It’s just a lot of fun.”

Coach Mark Tamminga jumped into the arms of his assistants after the win and hugged each player, but he knew who this win impacted most deeply.

“Johnny’s been so driven,” Tamminga said of Wassink, who was injured for the team’s state championship win in 2012. “I talk about the team being driven but especially Johnny.”

“After last year’s game he wanted a state championship game so bad. Two years ago when we won it, we did it without him so look at the way he played tonight, my gosh. We’re going to miss him so much.”

Wassink has committed to play at Western Michigan University next year and he said the influence Tamminga has had on his life and football career can’t be measured.

“He’s just a great coach,” Wassink said. “He knows how to relate to high school kids and motivate people. He cares about each and every one of his players and that’s a big key. You want to know that your coaches care about you and are looking after you and that’s what coach Tamminga does.

“Football and our Christian faith have a lot of parallels and he talks about that a lot. He’s not only a great coach but a great role model as well.”

Losing Wassink to graduation, along with 20 other players, will be challenging for Tamminga, he said, but one thing’s for sure: Broncos coach P.J. Fleck is getting a classy kid with a strong arm.

“He’s got a good one, he better treat him good,” Tamminga said. “He’s got one of the best football players I’ve ever been around, I can tell you that.”