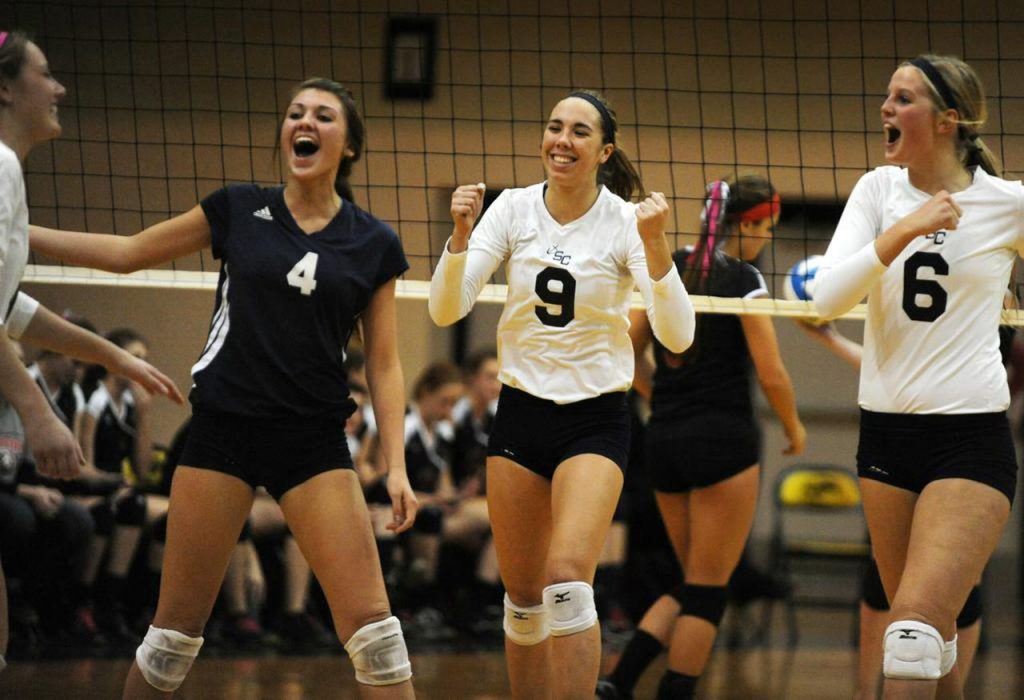 South Christian Varsity Volleyball claimed their first regional title in volleyball since the 2007 season as they posted a pair of wins over state-ranked Holland Christian (3-0) and regional newcomer Spring Lake (3-0). The team now advances to the state quarterfinal round on Tuesday, November 19 where they will face Berrien Springs at 7pm at Otsego High School.
The first match of the week pitted the No. 5 ranked Sailors and No. 6 ranked Maroons and South posted their fourth win over their rivals of the season in straight sets. Sets one and three were almost identical with the Sailors jumping out early and leading for most of the set while posting 25-17, 25-17 wins.
The second set was much different however as South fell behind 9-1 but rallied to tie it at 20-20 and used a huge block by Ashley VanderHorst at 22-22 to give them a one point lead in which they would win the set 25-23.
The Sailors produced a balanced attack led by Danie Oeverman with 14 kills, VanderHorst with 11, Cassidy Vredevoogd with 10 and Tay Wierenga with 8.  Emily Blankespoor dished out 37 assists and Morgan Torres had 14 digs.
Thursday then brought on Spring Lake who defeated Forest Hills Eastern in a thrilling 5-set match to reach the final. The first two sets saw South take control early and cruise to 25-9 and 25-12 wins. The third set featured a Spring Lake team not going down easy as they led for a majority of the early part but the Sailors would take the lead and never let up eventually taking a 18-15 lead and turning it into a 25-15 win.
Leaders in stats were Wierenga with 14 kills, Blankespoor with 30 assists and Torres with 12 digs.
The win sends South Christian into the quarterfinals on Tuesday with a chance to advance to the semifinals at Kellogg Arena in Battle Creek next weekend.
Sailors Official Sponsor