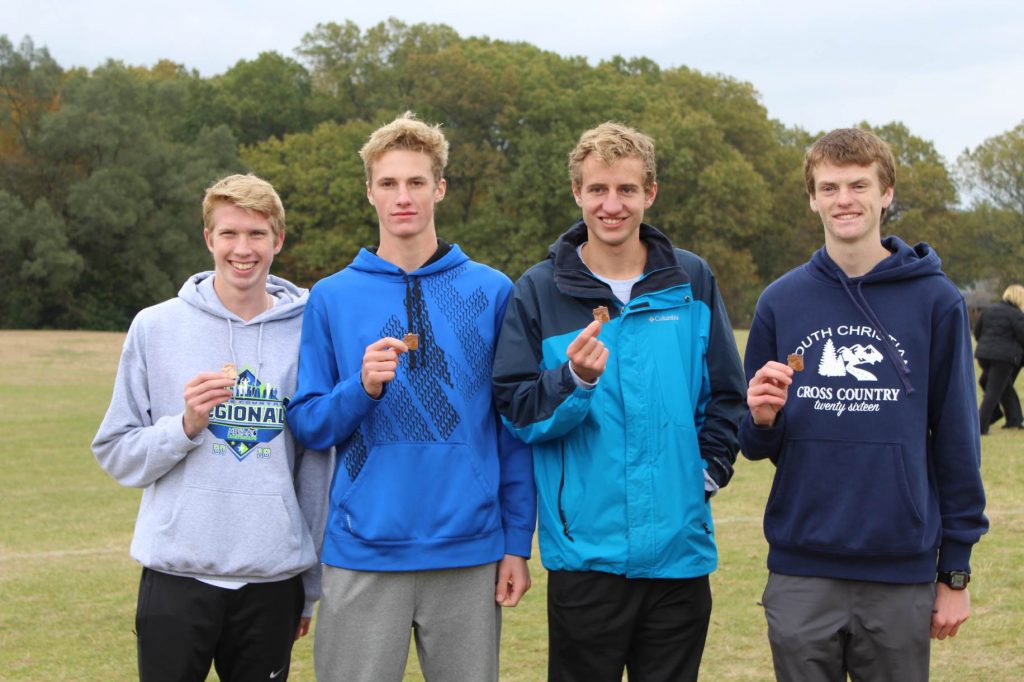 On Saturday, the SC Boys Varsity came into the highly competitive Division 2 Portage Regional in a tie for the #5 seed, based upon season best times, but ended up 3rd, securing a second consecutive trip to State Finals at Michigan International Speedway.  Junior Micah VanderKooi, battling multiple health issues, finished 4th in 16:37.2, followed closely by senior Owen Pruim in 6th with a lifetime best of 16:39.5.  Another junior-senior tandem of Jerad Berkenpas (17:06, a season best by 30+ seconds) and Anthony Nykamp (17:07.2, a lifetime best by 20+ seconds) finished in 14th and 15th respectively despite being ranked 25+ spots lower. And freshman Lucas VanDam broke 18:00 for the first time in his young career with a 17:50.2, good for 37th place, rounding out the team scoring with 76 points, just 9 points behind 2nd place Parma Western (sum of the places of the top 5 runners per team … lowest score wins). Their Varsity teammates, sophomores Hendrik Nykamp and Sam Westra, both ran 18:30.8, a lifetime best for Hendrik and Sam’s second fastest ever.  Three of their teammates chose to run in the Open Race later in the day, and sophomores Brandon DeVries and Garrett Schaaf both ran lifetime bests while freshman Tad Buiter ran the 2nd fastest time of his debut season.
The SC Girls Varsity came into the rugged Division 2 Portage Regional as the #11 seed and finished 8th, two points away from 7th.  Freshman Abby Winkle broke the 21:00 barrier for the first time, leading the Sailors with a 20:58.1. A pack of four teammates crossed the line in the next 17 seconds–senior Zoe’ Donker, junior Nithya Charles, senior Joz VanTol, and junior Anna Winkle–to round out the team scoring for the Sailors. Zoe’ was on the ’15 Varsity squad that finished 10th at the State Meet, and Joz on the ’16 team that finished 15th … and along with their many stellar senior teammates, both will be greatly missed next year.  Sophomore Moriah Lanning and junior Kate Langerak ably filled the 6-7 spots for the SC Varsity on Saturday.
Five senior girls had signature performances in the Open Race, led by four-year teammates Carissa Oskam and Olivia Heyboer, who both shattered their lifetime best performances in their final high school races, and Anna VanSledright, who ran a season best time.  First-year senior Meredith Bol ran her fastest time by 40 seconds, and third-year senior Maddie Leenstra–after being told by her doctor that she would not damage her aching hip further by racing–competed for the first time in six weeks and heroically found the finish line.  Juniors Jenny Offringa and Sydney Ybema; sophomores Gracie Patterson, Carissa Springvloed, and Jada VanTol; and freshmen Sarah DeVries and Paige Weesner also chose to compete in the Open Race and represented the Sailors wonderfully in their final races of the season.
Go Sailors!
Sep
08