When the Football Season was initially cancelled in early Fall, it was a domino effect that included sidelining the South Christian Sideline Cheer program. Football was then reinstated and an awesome group of student athletes wanted to reboot Sideline Cheer program. The Girls have been phenomenal and the Coaching Staff has been amazing. The Sailors 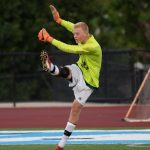